The Bad: Overall performance suffers due to the age of the device, meaning that you will have to be patient with this tablet from time to time.

The Verdict: Good value for the money, especially for those users looking for an affordable device that offers decent performance in a compact package.

The price drop for the 2013 Google Nexus 7 made it one of the best bang for the buck tablets in the sub $200 category. It's features are still very much competitive, and the performance it offers is already proven. While it's not the best thing you can get on the market at the moment, it is definitely one of the most affordable options available.

When it first came out, Nexus 7 was one of the best compact tablets on the market. It was just the right size, and offered performance that allowed for a buttery smooth experience. Today, several years later, Google has dropped the whole 'compact tablet' line of products, and focused their efforts on larger devices. Even though it was largely forgotten, Google Nexus 7 from 2013 is still a good device worth of your money, especially now with an updated OS and reduced price. Materials of choice are plastic and soft-touch rubber. While it's fairly sturdy, Google Nexus 7 feels somewhat old compared to other tablets.

Nexus 7 comes with a 7", 16:10 IPS, 1920x1200 display that is one of its best features. The image is crisp thanks to incredible color accuracy and great viewing angles. Watching Full-HD media becomes a true joy with this panel. The bezel that surrounds the display is reasonable in size, although it definitely attracts fingerprints. You will find a set of speakers on the back side of Nexus 7, which is probably the best solution as it doesn't reduce the already limited space on the front of the device. Sound is good, and the speakers are loud enough that you can watch a video on your tablet outside without having to strain your ears.

The CPU of choice is the Qualcomm Snapdragon S4 Pro 8064 Quad-Core 1.5 GHz unit that is still capable of delivering a decent performance, especially considering how much the applications have evolved since 2013. One aspect of performance where you will notice Nexus 7 struggles is the way it handles graphics. It has scored rather low on multiple GFX benchmarks which put its performance somewhere within the modern budget category of tablets. Operating system was upgraded from the Android 4.3 Jelly Bean, to Android 5.0 Lollipop, which definitely improves the user experience. When it comes to memory, Google Nexus 7 comes with 2GBs of RAM, and 16GBs of internal storage. There is no option for storage expansion.

You will find a front facing 1.2MP camera, and a rear 5MP camera. There is no flash on this device so taking pictures in low light conditions can prove to be very tricky. The quality of these cameras is average at best, but sufficient considering the age and the marked down price of the device. The 3950 mAh battery can withstand 10 hours of normal use, and doesn't drain quickly when under heavy load.

Considering Google Nexus 7 (2013 model) is already three years old, it is still holding up quite well. With this drop in price, it has become a very attractive option that offers decent performance across the board. Compact tablets are not so common anymore, and for anyone who appreciates the reduced size of these devices, Google Nexus 7 (2013 model) is definitely something to check out. 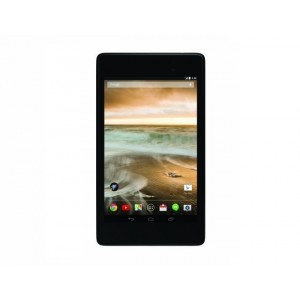