The Good: Easy-to-use, suitable for beginners and more experienced users, with a wide array of templates and effects that can be applied easily. It is especially good at cleaning up and enhancing video in a professional and customisable way without being inaccessible.

The Bad: Many of the effects and the templates have to be downloaded. This can only be done after the installation of the movie editor. Not available for Mac.

The Verdict: Powerful, easy-to-use, and with many useful editing features, MAGIX Movie Edit Pro Plus is a strong contender for one of the best video editing software.

MAGIX Movie Edit Pro Plus (MEPP) is a powerful video editor, very much themed around keeping itself user-friendly for both casual users and more advanced users. The interface is clean and simple-to-learn, with self-explanatory naming and tooltips that allow you to quickly learn what each part of the program does, meaning you can soon be producing edits and videos intuitively and quickly.

It should be noted for users of any previous MEPP that the interface has been changed and redesigned, but not to an extent that it will seem foreign; you will pick it back up easily.

An especially appealing aspect of MEPP is the layout and organisation of projects. There is a Timeline mode, which provides a view of the entire project in order, but interestingly there is also a Story Board mode and a Scene mode. Just like it sounds, the Story Board allows you to view different scenes quickly and navigate around your project, and Scene mode lets you view individual scenes, and between the two of them you can produce different transitions and get a good overview of your project.

Combined with the availability of multicam editing, and automatic synchronisation based on sound, this allows MEPP to be a hugely versatile and professional-like video editor software. With these features, MEPP is a good tool for both casual users and enthusiasts and professionals alike. It should be noted, however, that the multicam editing only supports two cameras, which may be limiting to some.

Also supported is 4K Ultra HD. Although considered next-generation and a very welcome, forward-thinking feature, it is for now largely unneeded for a casual user or anyone not trying to create extremely high-definition footage on a large, compatible screen. Full HD output is also included, as is 3D output, and Blu-ray disc creation. This is a testament to how up-to-date MEPP is and how modern its functions are.

Many movie templates are included with the purchase of MEPP, and although these have to be downloaded after purchase and installation, which may be unsuitable for some, it does provide a bevy of options for people wanting to create professional-looking videos easily and simply.

MEPP is also Windows 8-compatible and is available in both 32 and 64-bit versions. This means it can be a speedy and responsive program, especially on more modern hardware.

A somewhat unusual but very useful feature of MEPP is that it is able to directly read AVCHD format. This is a format commonly used by cameras that use memory cards or their own hard drives, and often requires conversion before use, but MEPP’s compatibility removes this need and so makes it much more simple and quick to begin editing straight away from something recorded from a dedicated video camera.

Although MAGIX Movie Edit Pro Plus is a little bit more expensive than most entry and intermediate editing software packages, it does compensate for this through many advanced features without the sacrifice of an inaccessible interface. This is definitely a product for someone looking for near-professional level editing software, who doesn’t mind the extra cost, or a casual user hoping to advance their knowledge and have the movie maker software that allows them to experiment.

Why choose MAGIX Movie Edit Pro Plus as your video editing software?

Want to know more about MAGIX Movie Edit Pro Plus? 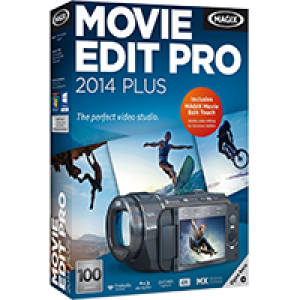