The Good: Arguably the most intuitive video editing software on the market today. Movavi Video Editor is great at what it does: Edit, cut, alter, splice and sync any video, photo or audio you would like. Movavi has an incredible array of compatibility and supported file types. Add to this the incredible intuitive layout of the program and Movavi is one of the best editors for beginners and user with a wide ran

The Bad: Not quite so catered to the professional area, and may leave those desiring advanced features wanting. Advanced features seen in Cyberlink Powerdirector are lacking.

The Verdict: A solid, potent movie editing software for beginners looking for a program that can use practically any file type known to men and that does the basics well, might we say very well.

One of the most immediately useful features of Movavi Video Editor are the sheer number of file types that are not only supported for opening and editing, but for exporting to. Often with modern programs, compatibility can be a huge issue that can result in files not opening, or frustratingly opening but being unwatchable. Movavi removes this problem by having a large umbrella of fully-functional file types that it can read and save to.

If you are trying to make a video watchable on a certain product such as an iPhone, Movavi can export your video into an appropriate file type at no loss of quality. As well as this, due to its ability to open almost any file type and then export it as another (convert it), it is able to make videos that were unwatchable on certain devices function fully with audio included. This is a strong feature that few other film editing software 2018 in our review can lay claim to being able to do with quite such an efficiency and compatibility

Also usefully, Movavi can change the quality, bitrate, resolution and so on of any given audio or video file, allowing you to create files of a smaller size or adjusted to whatever device may be required. While this is not a necessary feature for casual users and the default settings for export are well thought out and appropriate for many people, it is a welcome addition for more advanced users who may want file customisation at their fingertips.

Movavi isn’t just file conversion software, however. It contains many of the expected features of a video editor, such as cutting and moving scenes. It also includes standard features such as text and animation effects and slideshow creation.

The layout of Movavi is sleek and modern. It includes an area for video playback and, usefully, tabbed controls for including things such as text and effects, which makes the process a lot more efficient.

Another somewhat uncommon feature is the ability to take still frame pictures of the movie being played. This is a neat little feature that could be useful for creating previews or just simply for taking a photo of any scene that you might want to.

Movavi is Windows 8 compatible video editing software, and includes 64-bit support. As such, it is fast and effective as well as modern.

An accessible yet comprehensive program, Movavi shouldn’t be dismissed as just useful for video conversions. While this is a quality feature it is not all Movavi is capable of, and indeed that capability extends to being a competitive, useful, and easy-to-use video editor with all the required features for the general user. Although it is not likely to be creating huge movies any time soon, it is a movie maker that is efficient, provides remarkable file type and conversion support, and gives a casual video editor all the features they might need to create enhanced videos.

Why choose Movavi Video Editor as your video editing software? 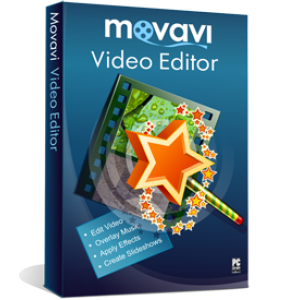