The Good: NVIDIA Shield K-1 comes with an impressive CPU and GPU that won't be outdated anytime soon. The Full-HD 1920x1200 display is crisp, and really makes gaming on this tablet a blast.

The Bad: Aside form it being a bit heavier than the competitors, there isn't much to criticize.

The Verdict: Lots of performance for not a lot of money make NVIDIA Shield K-1 one of the best tablets you can get right now.

NVIDIA has decided to noticeably step up their game when it comes to their tablets. The NVIDIA Shield K-1  tablet is probably one of their best by far. It appears that NVIDIA combined the best features of several of their previously made models in order to create something that would be attractive to a wide spectrum of users. Needless to say, they've succeeded.

There is no doubt that NVIDIA Shield K-1 is a gaming tablet geared toward users who expect enough performance to run even the most demanding games. That performance comes from NVIDIA's 2.2GHz Quad-Core Tegra K1 CPU and its Kepler GPU that surprisingly supports a number of features NVIDIA GeForce series of desktop GPUs support, such as Tessellation, DX12, and more.

The operating system was initially the Android 4.4 KitKat, but NVIDIA Shield K-1 has been updated to use the recent Android 5.1.1 Lollipop OS. NVIDIA Shield K-1 is a medium sized tablet having an 8-inch display, but is a bit heavy. The device comes with 2GB of RAM and internal storage set at 16GB. One of the best features on NVIDIA Shield K-1  is its crisp 1920x1200 display that makes using this tablet a wonderful experience.

The 19.75 Watt Hour Lithium-ion battery allows you to run full-HD video playback for 10 hours. Although it's a great tablet on its own, NVIDIA Shield K-1 takes things to another level once you pair it with its dedicated wireless controller, which you have to purchase separately.

NVIDIA Shield K-1 packs a lot of performance in a mid range device, making it perfect for gamers or users who just want a fast and capable tablet. With all it offers, it can easily compete with more expensive devices on the market. You could say that NVIDIA Shield K-1 is a bargain at this price. 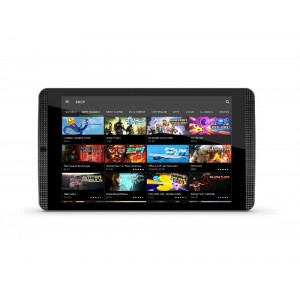